DITËT E NAIMIT AS A PROMOTION OF CULTURE AND LITTERATURE

Poets from over 20 countries of the world honoured Tetova, Naim, the Albanians from October 15th to 18th… The XIXth Edition of the International Poetry Festival “Ditët e Naimit” was a great poetical and cultural festivity. This traditional festival with international character took place in the main centre of the Albanians of poetry – Tetova. In the framework of its programme, a series of poetical, artistical and cultural activites took place. There were literary readings, poetry books were presented, a painting exhibition was inaugurated and there were visits to cultural, historical and religious monuments. 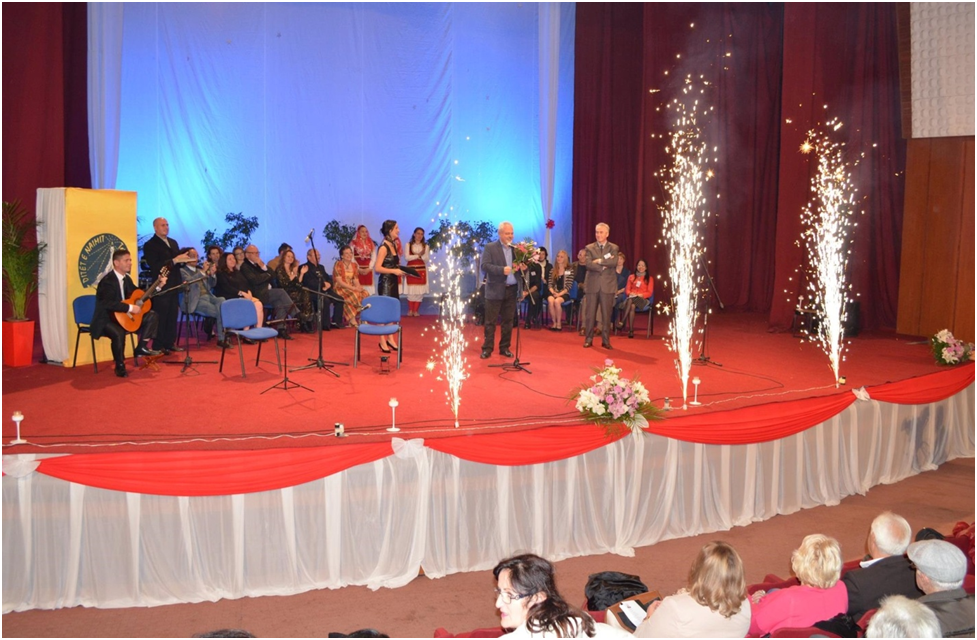 The festive ceremony of the XIXth Edition of the International Poetry Festival “Ditët e Naimit” was opened with an impressing firework performance in front of the Cultural Centre “Naim Frashëri” in Tetova. The director of the Festival, Shaip Emërllahu, the Albanian laureate, Basri Çapriqi, and the mayor of the Municipality of Tetova, Teuta Arifi, laid down bouquets of flowers in front of the statue of our national poet Naim Frashëri in the centre of Tetova. 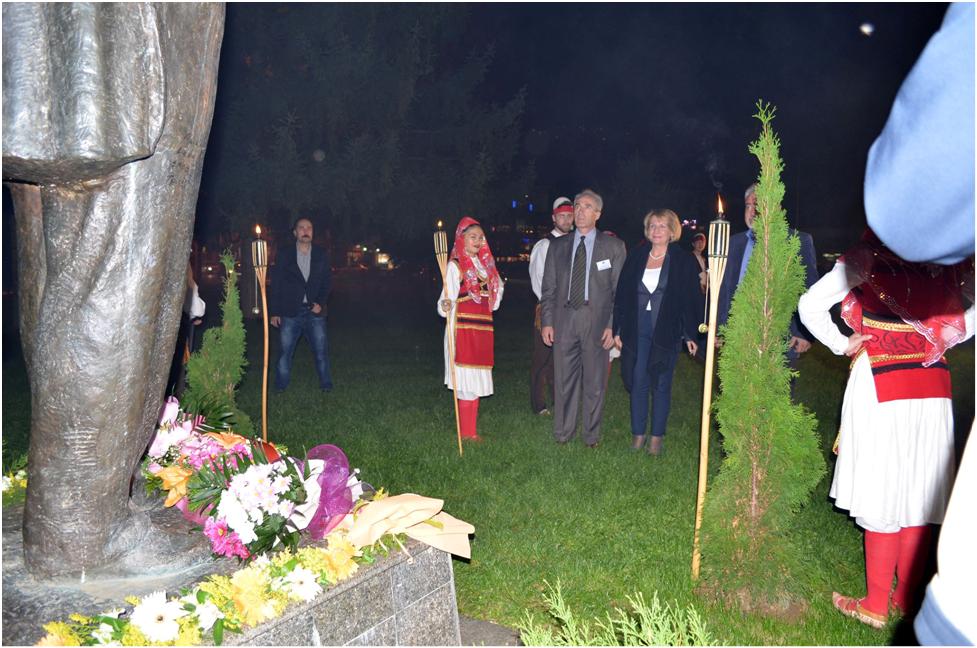 Then the exhibition of the paintings of Uran Limani was opened in the foyer of the Cultural Centre and the attendants were distributed catalogues of the paintings, brochures of the young Tetovar photographer Jetmir Sejdiu anf the Anthology of the Festival. 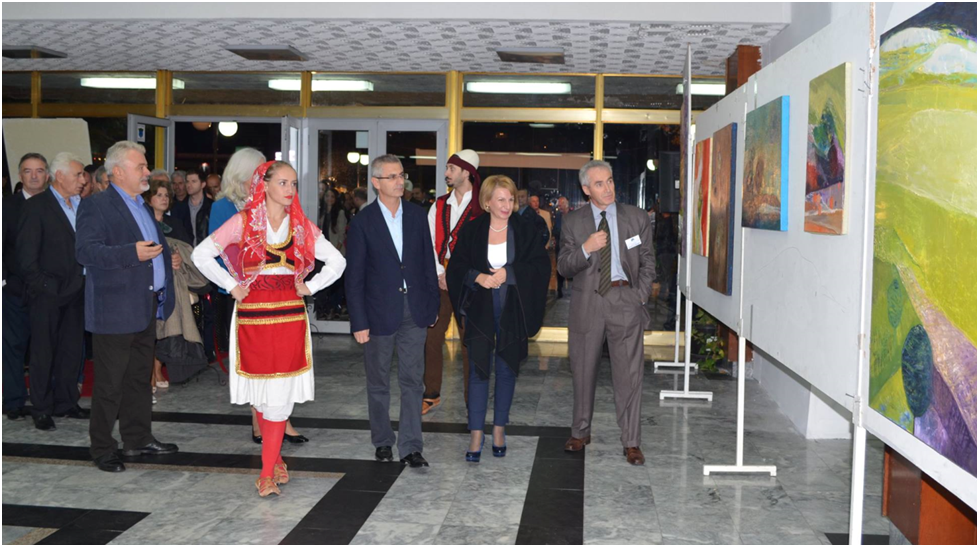 The IXIth Edition of the International Poetry Festival “Ditët e Naimit” was opened by the mayor of the Municipality of Tetova, Mrs. Teuta Arifi, who said among others that the International Poetry Festival “Ditët e Naimit” is an important activity which is organized in the town of Tetova, every year the gathering place of poets from different countries of the world. “We have supported it and will also do so in the future. I’d like to congratulate the director of the Festival, Shaip Emërllahu, for this great work he does.” 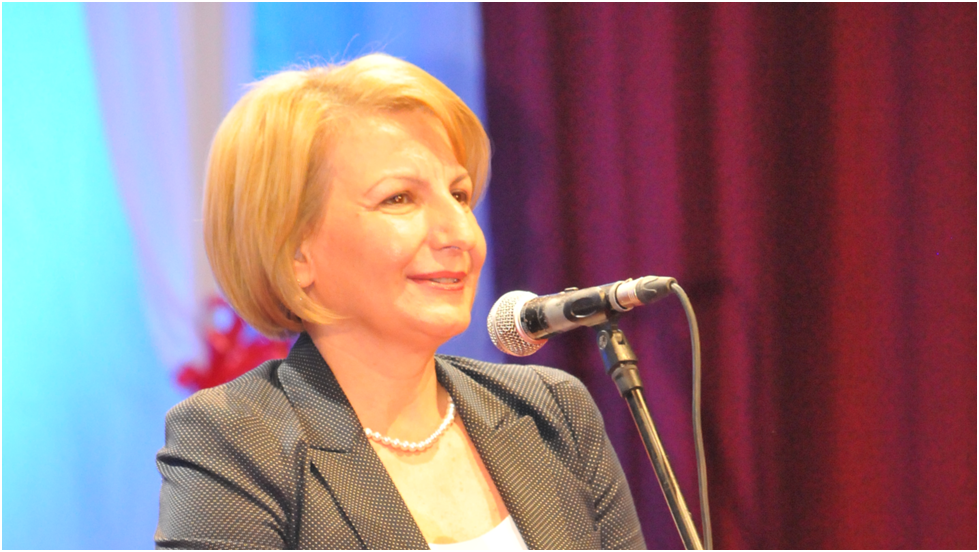 Then the director of the Festival, Shaip Emërllahu, pointed out: “In every opening of the Festival I underlined the role and importance of this wayshowing literary and cultural project in knowing, affirming and building of models of intercommunication, first between the poets and then with the public. I have exhausted the vocabulary about the value of this cultural and literary actor in building bridges of intercommunication, therefore, as for about two years I haven’t read my poetry on this stage, please allow me to do it today.” 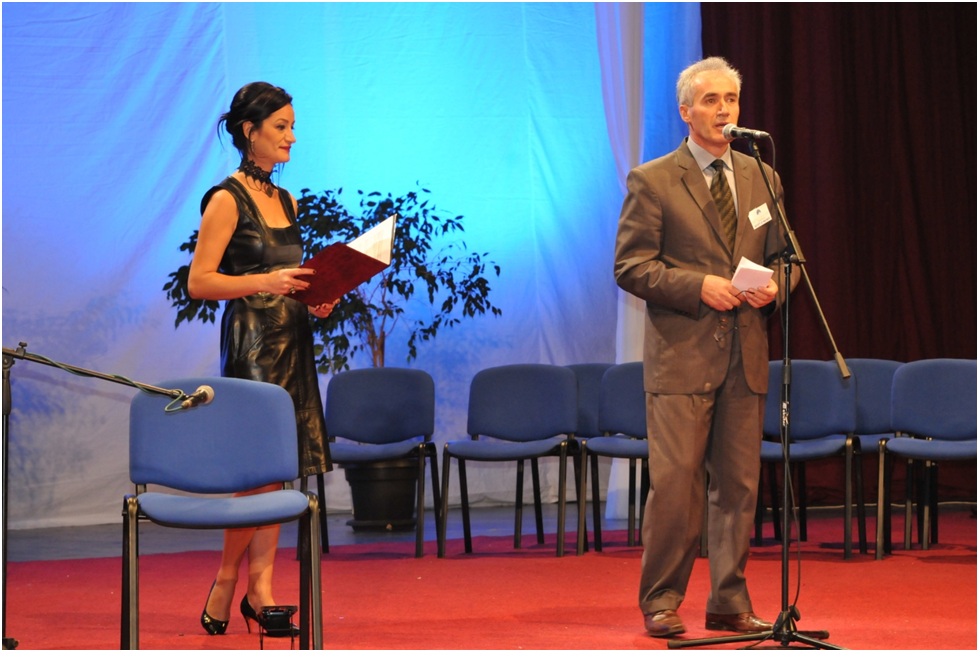 In the beginning of the Festival, two pieces of music were also performed by the guitarrist Naser Dula (Kosova) and the violonist Shkëlzen Pajaziti.

In the great literary hour “Poetic Globe”, the poets from their different countries read their poems, whereas the chairman of the Jury, Salajdin Salihu, read the motivation for the main award “Naim Frashëri” and the director of the Festival, Shaip Emërllahu, handed the prize to the laureate from Montenegro, Basri Çapriqi, for “High esthetic and artistic value”, and granted him the title of an Honorary Member of the Festival. On this occasion, the laureate Çapriqi thanked the organisers and the Jury for the awarding of this high prize of the Festival. 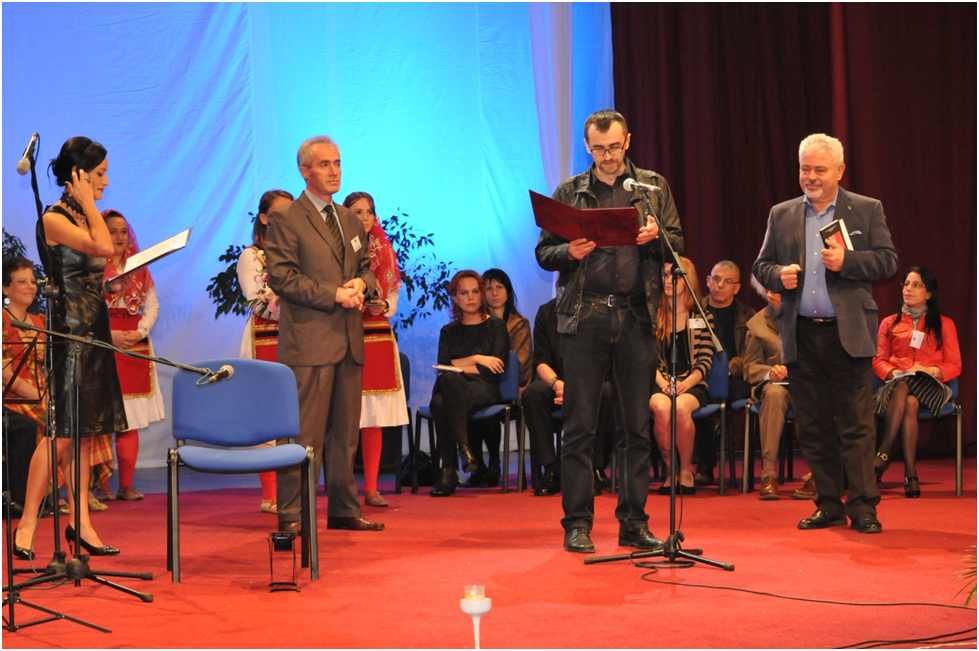 On the second day of the programme, the poets held the literary hour “Poets and Verses” and visited the Arabati Baba Tekke. 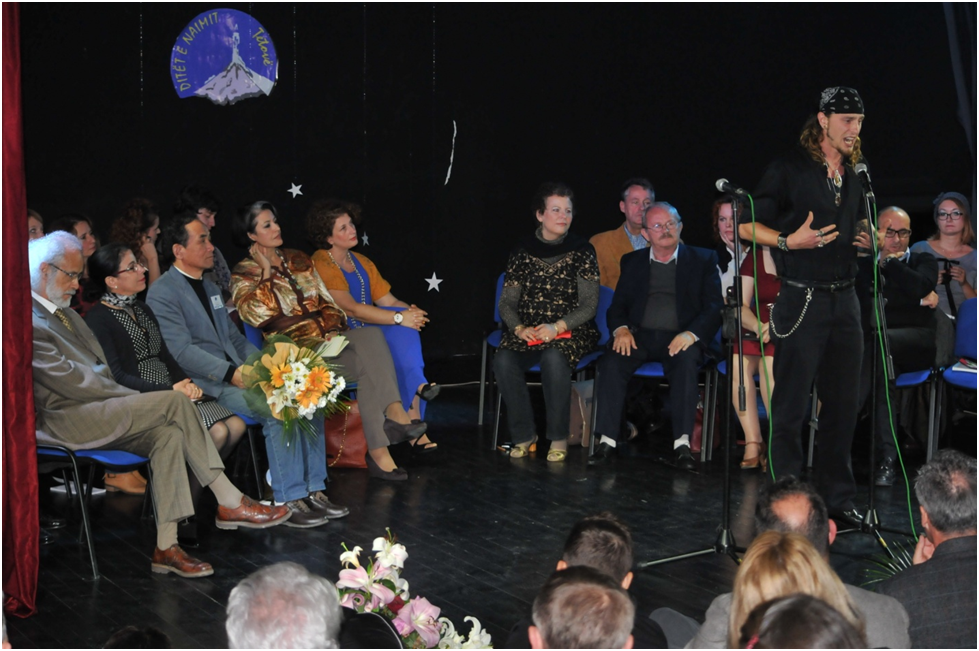 On the third day, three books of the participating poets were presented: “Behind the Moon” of the former laureate of the Festival, the Danish poet Peter Poulsen in Albanian, “Concerto” of the Belgian poet Daniel Leuwers in Italian and the book “Duet of Roads” of the poets Shaip Emërllahu and Taro Aizu from Japan in Japanese and English in the publishing house Junpa Books, Kobe. The critics and poets Giuseppe Napolitano, Ndue Ukaj and Taro Aizu spoke about the books. 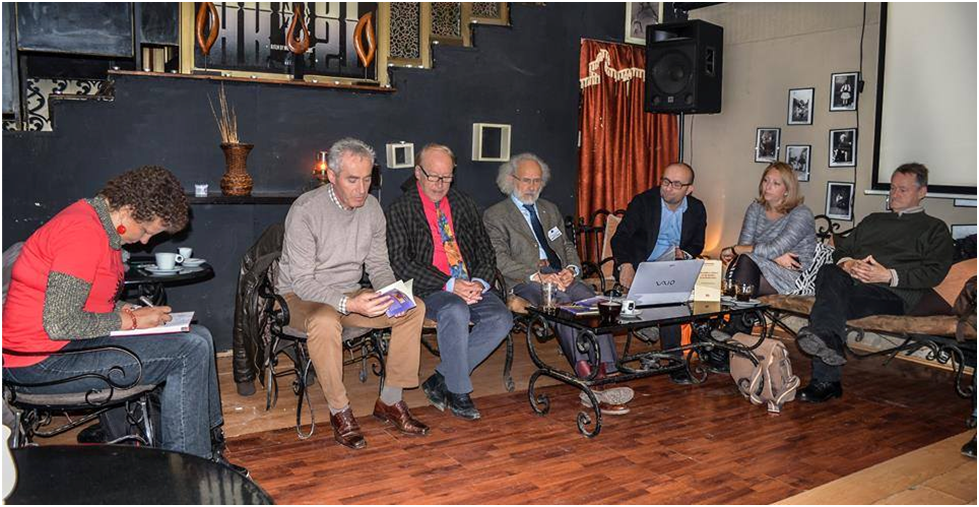 The Festival was closed with the great literary hour “Poetic Meridians”, which took place in the smaller auditorium of the Cultural Centre, where the poets read their poems and the remaining literary prizes of the Festival were awarded. The award for the literary career, “Ditët e Naimit”, was given to the Japanese poet Taro Aizu, the prize for special poetic values “Menada” was awarded to the Belgian poet Daniel Leuwers, the literary prize for the best poetic cycle “Oeneumi” was received by the Danish poet Niels Hav, the literary award “Naim’s Candle” was given to the poets Jessica Flynn and Dustin Nispel from the USA as well as to the Tetovar poet Remzi Salihu, and the literary prize with the name of the poet “Silke Liria” for the poetic expression was awarded to the Russian poet Anna Rostokina. 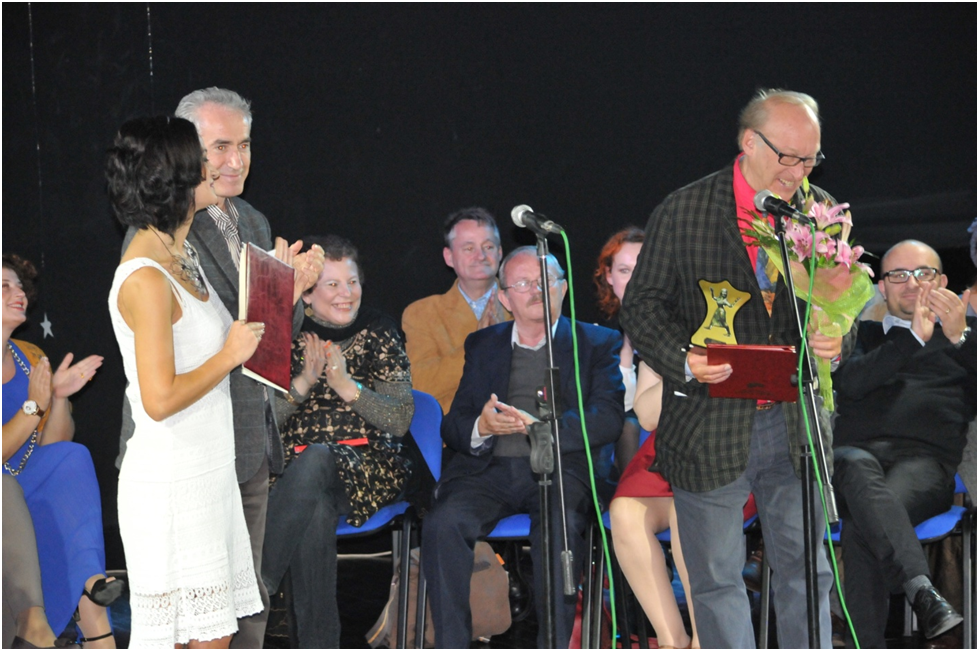 Also for this edition, the Direction of the Festival published an anthology with the poems of the participating poets, “Voices of Water”, compiled by Shaip Emërllahu.

The Festival was moderated by Verjana Abazaj. The poems were read in Albanian by the actor Arsim Kaleci and accompanied on the guitar by Naser Dula. The stage was designed by the painter Nevzat Bejtuli-Kica. 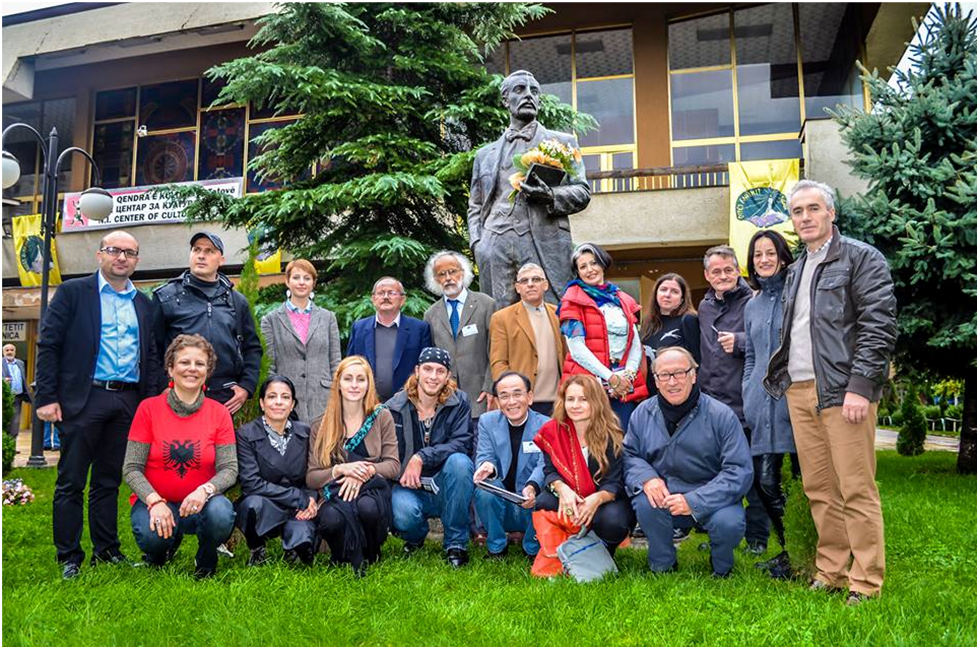