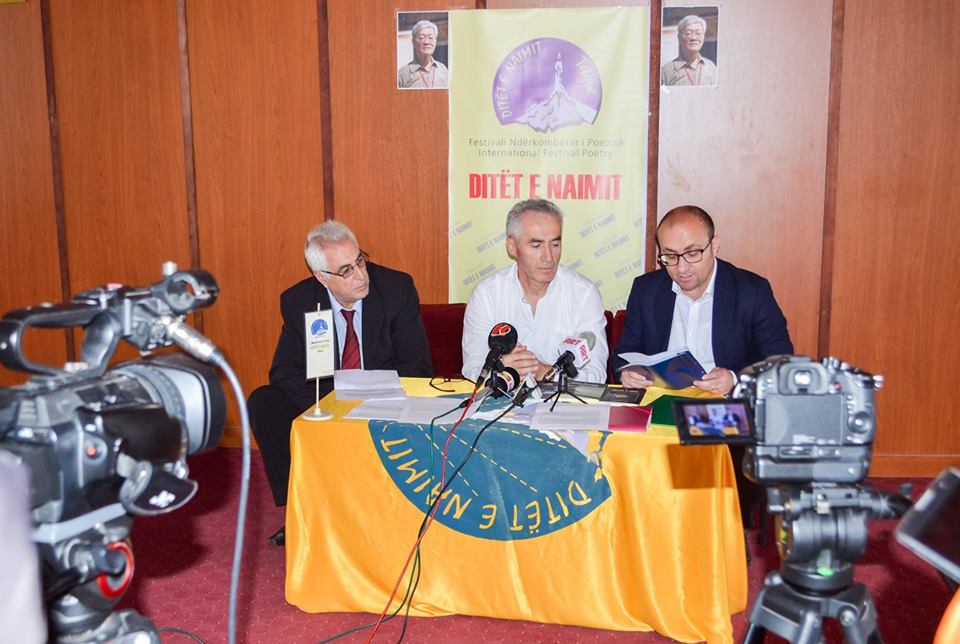 The winner of the main prize “Naim Frashëri” of the anniversary edition, the 20th in sequence, of the International Poetry Festival “Ditët e Naimit” is the renowned Taiwanese poet Lee Kuei-Shien, who has been nominated for several years for the Nobei Prize. This is the decision of the Jury of the Festival consisting of the scholar Prof. Dr. Ymer Çiraku (Albania), Ndue Ukaj (Kosova) and Xhelal Zejneli (Macedonia). The Direction of the Festival also appointed the well-known Albanian writer and scholar, Academy member Rexhep Qosja, as an Honorary Member of the Festival.

To this edition linked to the 20th anniversary of the Festival and the 170th birthday of the national poet Naim Frashëri, 40 poets from different people of the world are invited: from the USA, Argentina, Mexico, Taiwan, Japan, Denmark, Norway, Germany, France, Afghanistan, Italy, Poland, Lithuania, Israel, Russia, Turkey, Croatia, Slovenia, Bulgaria, Bosnia and Hercegovina, and poets from all Albanian-speaking countries and the diaspora.
Continuing the press conference, the member of the Jury of the Festival Ndue Ukaj read the justification of the Jury for the awarding of the literary prize “Naim Frashëri”: “Kuei-shien Lee was born in 1937 in Taipeh. There he graduated at the Institute of Technology. In 1976 he became a member of the International Academy of Poets in England. In 1987 he joined the Taiwanese PEN and was elected as its vice-president and later president. For some time he was the head of the National Foundation for Culture and Art in Taiwan. Currently he is the vice-president of the Movement Poets of the World (Movimiento Poetas del Mundo).

He started to write poetry in 1953. His published works include “Collected Poems” in six volumes（2001), “Collected Essays” in ten volumes（2002), “Translated Poems” in eight volumes（2003), ”Anthology of European Poetry” in 25 volumes（2001-2005）, ”Elite Poetry Collection” (in 22 volumes) and others, including “Golden Treasury of Modern Indian Poetry” (2005), in which the poems of the president A.P.J. Abdul Kalam are included.

He was awarded with diverse important prizes like “Merit of Asian Poet, Korea（1994）, with the “Rong-hou” Taiwanese Poetry Prize（1997), the award “World Poet of the Year 1997”, the award “Poets International”, India（1998）, the “Poet of the Millennium” Award of the International Poets Academy, India（2000）, the “Lai Ho” Literature Prize and the “Premium” Cultural Prize, both in Taiwan (2001). He also received the “Michael Madhusudan” Poet Award from the Michael Madhusudan Academy（2002）, the “Wu San-lien” Prize in Literature（2004）and the Poet Medal from the Mongolian Culture Foundation（2005）.

He was nominated three times as a candidate for the Nobel Prize for Literature by the International Poets Academy, India (2002, 2004, 2006).

He has attended international poetry festivals in different countries of the world, like the USA, Japan, Korea, India, Turkey, Mongolia, El Salvador, Nicaragua etc.
Earth, sky and sea represent a metaphorical triangle which appears quite frequently in the poetry of this Taiwanese poet, where the weight of yearning and the drama of the home country can be felt – with dreamy flights of delectable hopes. Strongly present in this poetry is the philosophical worldview about life, where ancient cultures and civilisations from the peoples of the Far East intertwine. The metapher of the homeland shines up in his poetry in an endlessness of sensations, from the most fragile to the most sublime and dramatic. For him, the homeland of Taiwan is the image of the mythical island enveloped in waves of white velvet, and the poet desires to observe it from a bird’s eye in the sky, all that lace made from kisses of countless seashells. The homeland is for him the unforgotten Ithaka, as many endless journeys as one may stray far of it. The reviews value in this poetry especially the dichotomy of leaving and returning, where the home and the world interweave not in opposition, but function in a harmonic philosophy of coexistence.

The awarding of the main prize “Naim Frashëri” of the 20th edition of the International Poetry Festival “Ditët e Naimit” for the excellent contemporary poet Lee Kuei-Shien is a valorisation and an honouring of the magic of the poetic art, in any language and any spirit of a people whete it is created. Each one of them is a part of the treasury of the world culture; they transmit values of humanism and of mutual coexistence among peoples and cultures”.

Finally, the other Jury member, Xhelal Zejneli, read the declaration sent in by the laureate on the occasion of the reception of the “Naim Frashëri” Prize: As a national of Taiwan, I am very surprised and moved by receiving a notification of bestowing me the laureate of literary prize “Naim Frashëri” of the festival far from poet Shaip Emerllahu in Macedonia. Naim Frashëri is one of the greatest Albanian poets who has accomplished a big contribution in reverting Albanian language, guarding Albanian national dignity, and further promoting to establish international independent and autonomous personality of Albanian people. Reading the poems by Naim Frashëri, I am deeply encouraged by the persevering will filled with enthusiasm expressed in his poetry. I have translated his famous representative poem “Words of the Candle” into Chinese, in which the stanza of

sufficiently shows a great sentiment to embrace the world, from which I perceive the spirit of Albanian people. The struggling process of Albania is worthwhile as a valuable lesson for Taiwanese people to learn. Unfortunately, since a long time due to the historical and geographical separation, Taiwanese people don’t know much about Albania people, Macedonia, Republic of Albania, and Kosovo. I decide to take the liberty in endeavoring my effort to carry out the communication of poetry between Albania and Taiwanese people in order to promote mutual understanding and friendship on the basis of people-to-people.