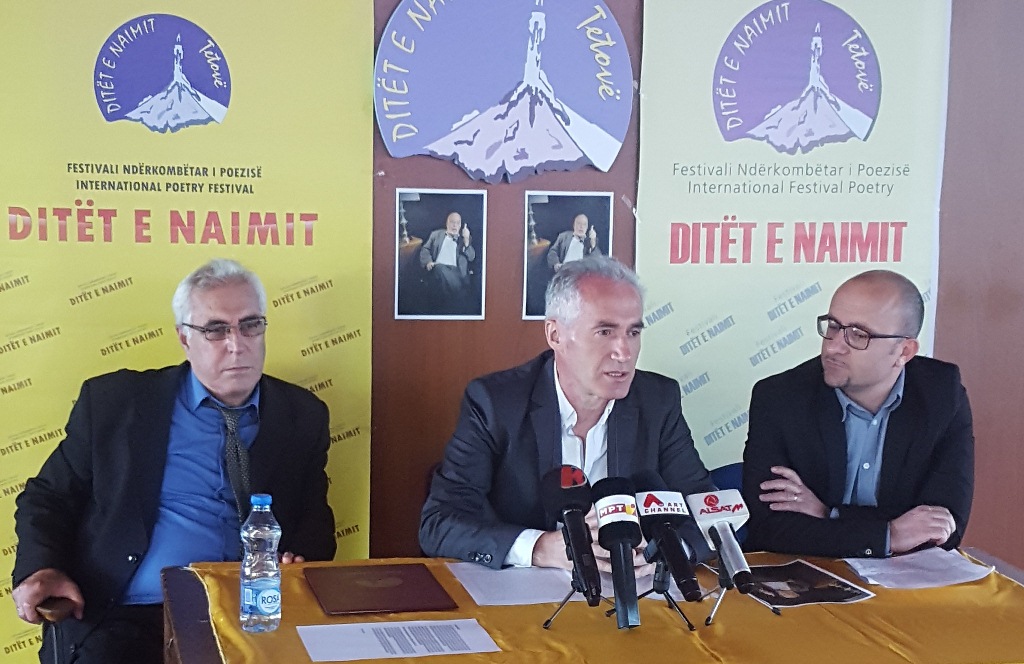 The winner of the main prize “Naim Frashëri” of the 21st edition of the International Poetry Festival “Ditët e Naimit” is the American poet George Wallace. This is the decision of the Jury of the Festival consisting of the poet and literary critic Ndue Ukaj (Kosova), the American poet and laureate Craig Czury (USA) and the literary scholar Xhelal Zejneli (Macedonia). The Direction of the Festival also appointed the laureate of this year as an Honorary Member of the Festival. The International Poetry Festival “Ditët e Naimit” will take place from October 19th to 22nd, 2017, in the city of Tetova.

Then the chairman of the Jury of the Festival, Ndue Ukaj, presented the justification of the Jury for the awarding of the literary prize “Naim Frashëri” with the following words:
The American poet George Wallace, is this year’s Laureate of the International Poetry Festival “Days of Naim” is a scholar-writer, who temporarily lives in Walt Whitman’s home. He is the author of many books and is distinguished for his poetic originality, with which he envied the admirers of poetry and the beautiful artistic word. His poetry resembles the angels of the night fleeing into an obscene obscurity that accompanies contemporary life: intellectual, spiritual, and cultural insanity… The writer George Wallace, with deep poetic imagery and penetrations, conveys to a rich and cherished world of aesthetic idolatry, to keep man alive even at the time of the foggy civilization and idiotic rain. Moreover, he grids the reader for hope, as do all good poetry. His poetry speaks with the language of time and it’s the signaling of light that distributes it with the transcendent and incomprehensible power of language. Is it possible that “the mist of civilizations and idiotic rain” can be clarified with poetry? This challenge and dilemma faces the poetry of this year’s laureate, coming to the International Poetry Festival “Days of Naim” through a condensed aesthetic, where the fog and idiot rain are invisible, because behind the civilization of soul, poetry and torch is radiant, which can not hinder any power”.
After that, the Director of the Festival, Shaip Emërllahu, read the declaration of the laureate George Wallace, where he wrote: “It is with a sense of great excitement and humble anticipation that I accept the honor you have bestowed on me, in naming me recipient of the 2017 International Poetry Prize “Days of Naim.” A great honor indeed to follow in the footsteps of such distinguished poets as Ismail Kadare, Desmond Egan, Ewa Lipska, Athanase Vangchev de Thracy and fellow American Craig Czury, all of whom have previously received this recognition. And a great thrill that, as writer in residence at the Walt Whitman Birthplace in New York, I have this opportunity to build a bridge between America’s great national poet and your own iconic Naim Frasheri.

To my way of thinking, the connection between Whitman and Frasheri is profound. Both of these monumental 19th century literary figures strove, through poetic language, to promote a unity among peoples and sense of common humanity while respecting the deep differences of region, custom and dialectic within their respective nations. Their promulgation of a strong and overriding humanistic pathos served the process of nation-building, and helped overcome profound sociocultural divisions during their lifetime.

Furthermore, their accomplishments serve as models for us today.

I believe I share with Ditet E Naimit festival organizers the belief that poetry has the capacity to join people of different cultures together, offering them a fresh ‘code of language’ with which to affirm their cultural and social identity while reaching out to each other with respect and appreciation. Particularly in these challenging social and political times, this capacity is of vital international importance.

In the name of building bridges between peoples and fostering mutually rewarding and respectful cross-cultural exchange, I look forward to gathering with this year’s lineup of distinguished poets to produce a vibrant and memorable 2017 Ditet e Naimit festival”.
Finally the Jury member Xhelal Zejneli read a short biography of the prizewinner, where it is said: “American poet George Wallace is writer in residence at the Walt Whitman Birthplace, first poet laureate of Suffolk County, LI NY, and author of 31 chapbooks of poetry in the US, UK and Italy. A former US Peace Corps Volunteer (Korea), he has lived and worked in Europe and Asia, as well as numerous locations in the United States. A native New Yorker, for 5 years he lived and worked in the United Kingdom and he continues to travel there regularly.
A former student of Marvin Bell and WD Snodgrass, George holds an MFA in Creative Writing from Pacific University in Oregon, and teaches writing courses in the NYC area at Pace University and Westchester Community College. His work is collected in the archives of Hofstra University, and his poetry recorded for the Poetry and Literature Center at the Library of Congress in Washington DC.”

As usually, the programme of the current edition will have a multifaceted content. In this framework, several literary hours will be held, a painting exhibition will be opened, books will be promoted, cultural and historical sights will be visited, and so on.