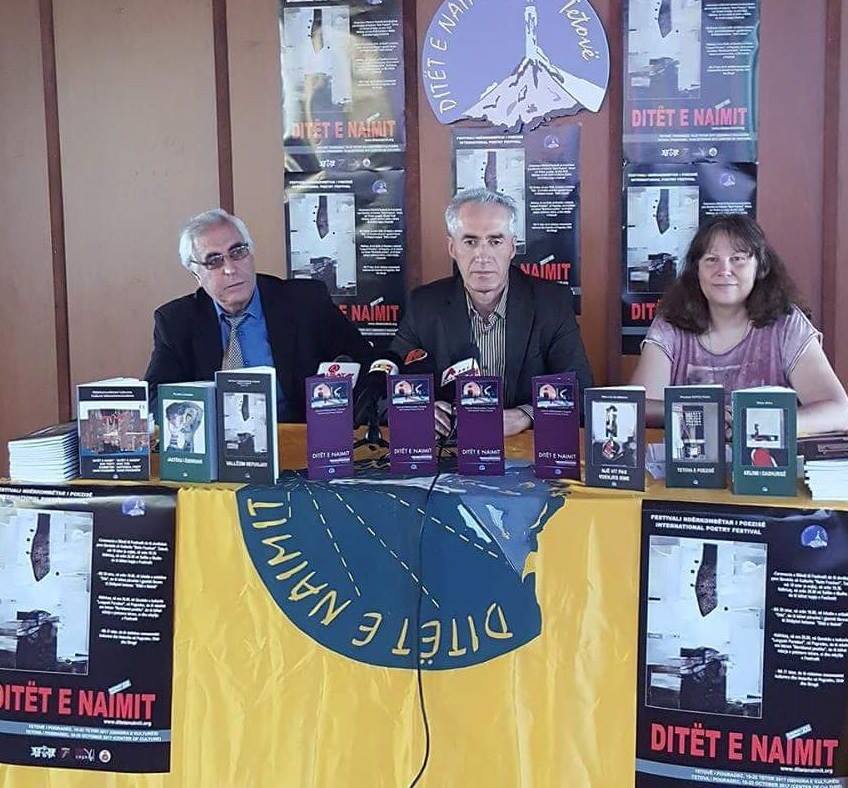 Yesterday, in the Cultural Centre “Naim Frashëri” in Tetova, the Direction of the International Poetry Festival “Ditët e Naimit” held its press conference, where the programme of the 21th edition was presented, which will take place from October 19th to 22nd in Tetova and in Pogradec. During these days, several literary, artistic and musical activities as well as the presentation of the newest titles of the publishing house of the Festival will take place. We will then visit some cultural and historical sights of the towns around the Lake of Pogradec.
About 30 poets have confirmed their presence at this year’s edition, from countries like the USA, Puerto Rico, India, Israel, Denmark, Sweden, Germany, Italy, the Netherlands, Spain including Catalonia, Turkey, Greece, Serbia, Bulgaria etc., as well as from all Albanian-language countries and regions.
The opening ceremony of the Festival will take place in front of the Cultural Centre, Tetova, on Thursday, October 19th, at 7:30 pm. The laureate of the Festival, the American Poet George Wallace, and the Director of the festival will place bouquets of flowers at the statue of the national poet Naim Frashëri in front of the Cultural Centre. At 8:00 pm in the Great Auditorium, the festival will be opened. This will be done by the Festival Director Shaip Emërllahu. After that, during the poetic hour “Poetic Globe”, the poets from around the world and the Albanian poets will read their creations. In the framework of this literary, artistic and musical programme, the laureate George Wallace will receive the great literary award “Naim Frashëri” and he will be given the title of an Honorary Member of the Festival. During this opening ceremony, the Direction will confer the title of an Honorary Member also to the well-known Greek poet Dinos Koubatis.
On the second day of the Festival, at 10:00 am in the restaurant “Oda”, six titles of foreign and Albanian poets, the new books of the publishing house of the Festival, will be presented. These are: The book with the contributions of the foreign and Albanian poets and scholars for the academic conference which took place last year at the 20th anniversary of this cultural and literary event, with the title “Cultural Intercommunications – ‘Ditët e Naimit’ and the national poet Naim Frashëri”; the book with short stories of the poet Silke Liria Blumbach “Një vit pas vdekjes sime” (One Year After My Death), with a preface by the poet Moikom Zeqo; the book “Tetova e Poezisë” (Tetova of Poetry) by the Italian poet Giuseppe Napolitano, translated by the poet and translator Arjan Kallço; the book “Jastëku i ëndrrave” (Pillow of Dreams) by the Indian-American poet Nivedita Lakhera, translated by Silke Liria Blumbach; the book “Krijimi i dashurisë” (Creation of Love) by the Albanian poet Ndue Ukaj as well as the anthology of the participating poets of this year, “Vallëzim refugjati” (Refugee Dance). The books were edited by Shaip Emërllahu. The poets and students Ndue Ukaj, Migena Arllati, Xhelal Zejneli, Remzi Salihu dhe Reshat Sahitaj will talk about these books. The book covers contain paintings of the art professor Majlinda Kelmendi.
After the book presentation, the poets will leave for Pogradec. In the evening, in the Cultural Hall “Lasgush Poradeci”, the great literary hour “Poetic Meridians” will take place with a welcome speach by the Mayor of Pogradec. In this poetic hour, the remaining prizes of the Festival will be awarded: “Menada”, “Ditët e Naimit”, “Oeneumi”, “Qiriu i Naimit” (Naim’s Cancle) and “Silke Liria”.
In the framework of this Festival, national Albanian costumes will be exposed and some pieces of music will be executed by the artists Kastriot Marku, Shkëlzen Pajaziti and Biondina Selami. The poems of the foreign poets will be read in Albanian by the actor Arsim Kaleci and accompanied on the guitar by Naser Dula.
Towards the end of the Festival, the poets will visit some cultural monuments in Pogradec, where the poets will lay down flowers at the statues of the great poets Lasgush Poradeci and Mitrush Kuteli. On the way to Tetova they will also visit Ohrid and Struga.