The 21st Edition of the International Poetry Festival “Ditët e Naimit”, which took place from October 19th to 22nd, 2017, in Tetova and Pogradec, was closed. It was a dense literary, artistic and cultural programme. There were two literary readings, 6 new books of the publishing house “Ditët e Naimit” were promoted and there were visits to cultural, historical and religious monuments in Tetova and Pogradec.

The festive opening of the 21st Edition of the International Poetry Festival “Ditët e Naimit” happened with a beautiful firework in front of the Cultural Centre “Naim Frashëri” in Tetova. The Festival director Shaip Emërllahu, the American laureate George Wallace, Teuta Arifi, the mayor of the Municipality of Tetova, and the State Secretary of the Ministry of Culture, Valmir Aziri, as well as the delegation of the Bektashi community laid down bouquets of flowers in front of the statue of the poet Naim Frashëri.
At the entrance of the Cultural Centre, during this opening, the public was offered for free the Anthology of this edition and five other new publications of the Festival. 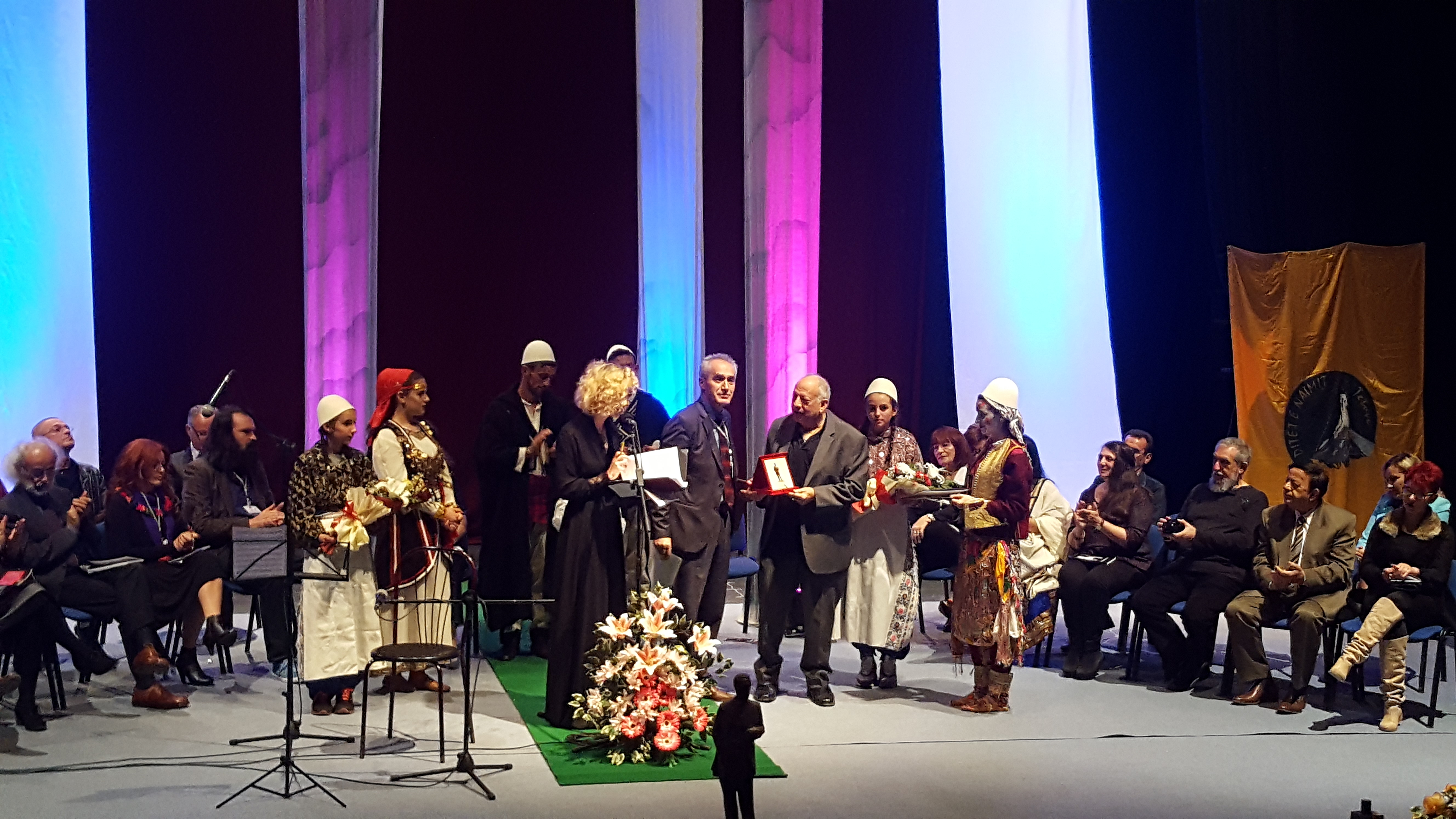 The jubilee edition was opened by the director of the Festival, Shaip Emërllahu, who said: “The world continues to be accompanied by a disharmony, a chaos which from time to time assumes really disturbing dimensions. This dimension of disharmony reminds us of the myth of Cain and Able, where the brother kills his brother, thus paving the way for a struggle between good and evil. To make the scale tip towards good, society had prophets and sacred scriptures, which have played an important role to turn the world into a better place. Later there came the creators of arts, literature, poetry, who by their own force influence society and man towards perfection while turning the world into a better, nobler, more perfect place, where love and the harmony of nature have the power. This is also the mission of our cultural event ‘Ditët e Naimit’, which with different activities in the fields of literature, music, visual and other arts has been playing for over twenty years its role within the humanization of man and the construction of a better world.”

During the opening of the Festival, the actor Arsim Kaleci recited Naim Frashëri’s poem “Words of the Candle”, whereas the talented pianist Biondina Selami played a musical piece on the piano.
In the great literary hour “Poetic Globe”, the poets from their different countries read their poems, whereas the chairman of the Jury Ndue Ukaj read the motivation for the main award. “He is the author of many books and is distinguished for his poetic originality, with which he envied the admirers of poetry and the beautiful artistic word. His poetry resembles the angels of the night fleeing into an obscene obscurity that accompanies contemporary life: intellectual, spiritual, and cultural insanity.

In ” the mist of civilizations and idiotic rain “, the poetry seeks its way through the image and musicality of the soul, as a spirit creature that has ontology on its beauty, aesthetics, sound and  music, intelligence and humanism to fill the world with more charm, love and humanity.

The writer George Wallace, with deep poetic imagery and penetrations, conveys to a rich and cherished world of aesthetic idolatry, to keep man alive even at the time of the foggy civilization and idiotic rain. Moreover, he grids the reader for hope, as do all good poetry. His poetry speaks with the language of time and it’s the signaling of light that distributes it with the transcendent and incomprehensible power of language.

Is it possible that “the mist of civilizations and idiotic rain” can be clarified with poetry? This challenge and dilemma faces the poetry of this year’s laureate, coming to the International Poetry Festival “Days of Naim” through a condensed aesthetic, where the fog and idiot rain are invisible, because behind the civilization of soul, poetry and torch is radiant, which can not hinder any power.

Yes, the poet George Wallace invites us, hoping that “the mist of civilizations and idiotic rain” are temporary creeds, that faded the man with vanity and routine, but powerless in the face of beautiful art, poetry, a lively and destined creature for eternity”.

The director of the Festival Shaip Emërllahu handed the great award “‘Naim Frashëri”, which is given for “High esthetic and artistic values”, to the laureate, the well-known American poet George Wallace, and conferred him the title of an Honorary Member of the Festival.

On this occasion, the American laureate Wallace, after thanking the organisers and the Jury for the awarding of this high award of the Festival, pointed out: “ It is with a sense of great excitement and humble anticipation that I accept the honor you have bestowed on me, in naming me recipient of the 2017 International Poetry Prize “Days of Naim.” A great honor indeed to follow in the footsteps of such distinguished poets as Ismail Kadare, Desmond Egan, Ewa Lipska, Athanase Vangchev de Thracy and fellow American Craig Czury, all of whom have previously received this recognition. And a great thrill that, as writer in residence at the Walt Whitman Birthplace in New York, I have this opportunity to build a bridge between America’s great national poet and your own iconic Naim Frasheri.

To my way of thinking, the connection between Whitman and Frasheri is profound. Both of these monumental 19th century literary figures strove, through poetic language, to promote a unity among peoples and sense of common humanity while respecting the deep differences of region, custom and dialectic within their respective nations. Their promulgation of a strong and overriding humanistic pathos served the process of nation-building, and helped overcome profound sociocultural divisions during their lifetime.

Furthermore, their accomplishments serve as models for us today.

I believe I share with Ditet E Naimit festival organizers the belief that poetry has the capacity to join people of different cultures together, offering them a fresh ‘code of language’ with which to affirm their cultural and social identity while reaching out to each other with respect and appreciation. Particularly in these challenging social and political times, this capacity is of vital international importance“.
Up to now, the title of an Honorary Member of the Festival was given to well-known writers and intellectuals, like Ismail Kadare (Albania), Desmond Egan (Ireland), Thomas Tidholm (Sweden), Manlio Argueta (El Salvador), Abdellatif Laâbi (Morocco), Peter Poulsen (Denmark), Lionel Ray (France), Eva Lipska (Poland), Craig Czury (USA), Tua Forsström (Finland), Athanase Vantchev de Thracy (France), Sebastiano Grasso (Italy), Kuei-shien Lee (Taiwan) etc. This time, the Greek poet Dina Koubatis was given the high title of an Honorary Member of the Festival for his contribution to literature.

On the second day of the programme, in the artists’ café “Oda”, six new books of the publishing house “Ditët e Naimit” were promoted. The book with the contributions of the foreign and Albanian poets and scholars for the academic conference which took place last year at the 20th anniversary of this cultural and literary event, with the title “Cultural Intercommunications – ‘Ditët e Naimit’ and the national poet Naim Frashëri”; the book with short stories of the poet Silke Liria Blumbach “One Year After My Death”, with a preface by the poet Moikom Zeqo; the book “Tetova of Poetry” by the Italian poet Giuseppe Napolitano, translated by the poet and translator Arjan Kallço; the book “Pillow of Dreams” by the Indian poet Nivedita Lakhera, translated by Silke Liria Blumbach; the book “Creation of Love” by the Albanian poet Ndue Ukaj as well as the already mentioned anthology of the participating poets of this edition, “Refugee Dance”, prepared by Shaip Emërllahu. The poets and scholars Ndue Ukaj, Xhelal Zejneli, Remzi Salihu and Reshat Sahitaj talked about these books.

In the afternoon, the participants left for Pogradec. There the second part of the programme of the Festival took place in co-organisation with the Municipality of Pogradec.

The programme of the 21st edition of the International Poetry Festival “Ditët e Naimit” was closed with the great literary hour “Poetic Meridians”, which took place in the Cultural Centre “Lasgush Poradeci” in Pogradec, where the poets read their poems and the remaining literary prizes of the Festival were awarded. The prize “Menada” for special poetic value was given to the Catalan poet Tonai Passola.
The literary prize “Ditët e Naimit”, which is given for one’s literary career, was awarded to the Albanian poet Bardh Frangu.

The literary prize “Oeneumi” for the best poetry cycle went to the Albanian poet Belfjore Qose.
The literary prize “Naim’s Candle” for the best poem was given to the Turkish poet Sema Güler.
The literary prize “Silke Liria” for the poetic expression was given to the Indian poet, Nivedita Lakhera.
On the third day, the participating poets laid down flower bouquets at the statues of the writers Lasgush Poradeci and Mitrush Kuteli. On the Poets’ Square the director of the Festival, Shaip Emërllahu, handed also acknowledgment documents to the mayor of Pogradec, Eduart Kapri, and the vice-mayor, Avdulla Cano, for their support to the organisation of the Festival. Later, some cultural and historical monuments of the city of Pogradec were visisted, after that Drilon, Ohrid and Struga.
The Direction of the Festival published for this edition, too, the anthology with the poems of the participating poets, “Refugee Dance”, compiled by Shaip Emërllahu.

On the 21st anniversary of the Festival the direction gave out acknowledgment documents for the contribution to the completion of the programme with musical works and thus to the high level of the Festival: Jeton Pustina, Naser Dula, Shkëlzen Pajaziti and Biondina Selami. The Festival was moderated by Arlinda Zymeri. The poems were read in Albanian by the actor Arsim Kaleci and accompanied on the guitar by Naser Dula.

The Festival was supported by the Ministry of Culture of the Republic of Macedonia, the Municipality of Pogradec and the sponsors Logos A and the restaurant “Kurtishi”.

The winner of the great prize “Naim Frashëri”, of the XXIV Edition of the International Poetry Festival “Ditet e Naimit” is the Macedonian poet Lidija Dimkovaska. This is the decision of […]