The festive opening of the 17th edition of the International Poetry Festival “Ditët e Naimit” took place with fireworks and torchlights carried by girls and boys in the Albanian national costumes in front of the Cultural Centre “Naim Frashëri” in Tetova. The director of the Festival Shaip Emërllahu, the French laureate Athanase Vantchev de Thracy, a delegation of the Municipality of Tetova and the Great-Grandfather of the World Headquarters of the Bektashi Community, laid down bouquets of flowers in front of the statue of the Albanian national poet Naim Frashëri in the centre of Tetova. 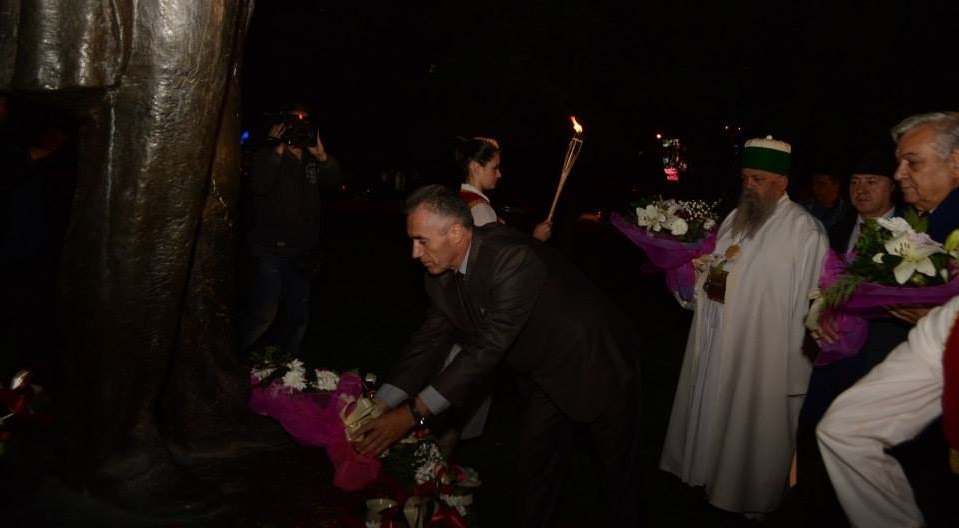 The 17th edition of the International Poetry Festival “Ditët e Naimit” was opened by the director of the Festival, Shaip Emërllahu, who pointed out: “Poetry (literature) opens widely the unprejudiced doors and windows of our world. It incites us to come to other forms and ways, to organize and understand this reality.

Not only, it gives us such emotions, making us part of an impressive plan, filling life with perception, helping the perfection of everyone through humanization. Poetry makes you alive…

Where in this blueprint is the literary and cultural symbol, such as this festival is? It makes these dimensions more present, more perceptible to us. It shows us in a way where the written form of poetic text with that read aloud is interlaced, with the author himself, in another space and performance that changes the constancy of taste and production of its multi-semantic understanding.

This intercommunication model is useful not only for highlighting and promoting the poetic art, but also other associated arts, and building the dialoguing infrastructure of authors, literatures, ethnicities etc.

Our poetic and cultural operator “Ditët e Naimit” is such an event, which for nearly two decades, by making its best effort, tries to play this role.” 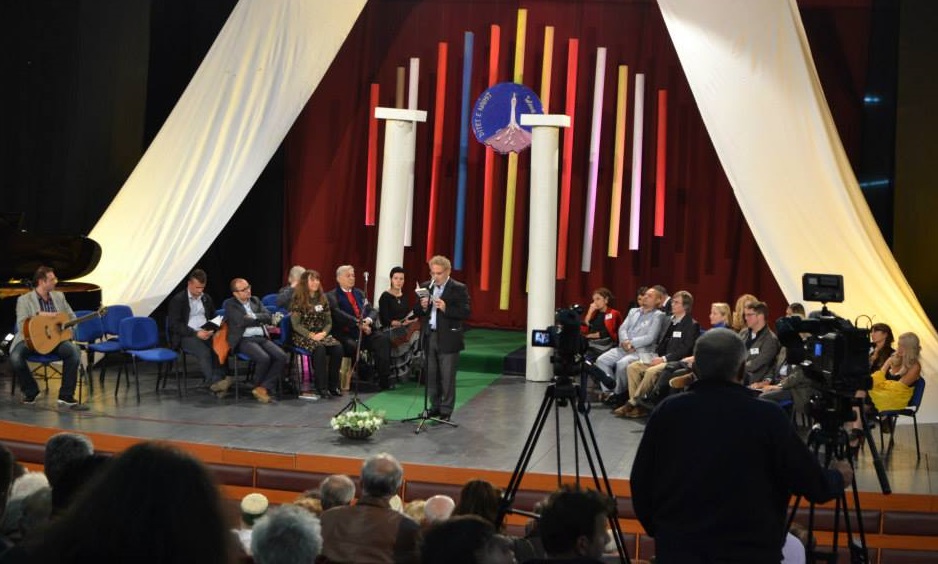 This year, a welcoming speech to the audience was hold also by the former Albanian Minister of Culture, Visar Zhiti, who said: “The profound yearning of Naim continues to be satisfied here in beautiful persistence and dignity, it was not written in paper, but in the spirit, for us gathering and rejoicing in, and obeying to what was in the beginning: the Word, the Albanian word, and that of other languages, treasures of humankind, transformed into melodies and rhythm and rescuing emotion, in poetry.

It has become a habit now for poets from all Albanian regions and different countries and continents to gather here year after year, we befriend, exchange messages, become a book here, and we spread them through sustaining civil manners to the benefit of life, her value. Life is sacred, it is our choice to make it beautiful. For doable this is.

Tetova makes its contribution, congratulations to the originators, for every year it brings a novelty, it adds the guests and seats, making them dear to us, similar to the homelands. And we are born again into ever more better selves. During the great literary hour “Poetic Globe”, the poets recited their poems, whereas the director of the Festival, Shaip Emërllahu, handed the main award “Naim Frashëri” to the laureate from France, the poet of Bulgarian origin Athanase Vantchev de Thracy, and conferred him the title of an Honorary Member of the Festival. On this occasion, the laureate de Thracy thanked the organizers and the jury for their appreciation for his poetic work and himself. 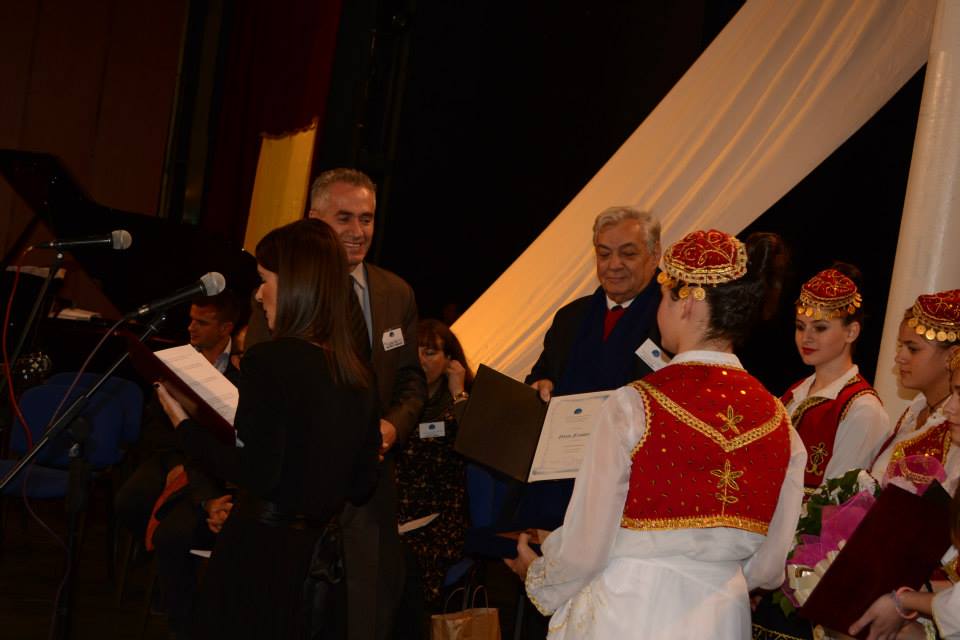 On the second day of the programme, the laureate Athanase Vantchev de Thracy was presented in the amphitheatre of the State University of Kosova. In his welcoming speech, the dean Prof. Dr. Vullnet Ahmeti said: “I am very pleased to greet all the participants of this Festival in the name of the State University of Tetova and personally, especially the guests from all over the world, who have honoured us with their participation.

All these poets and people of the academic world in their countries from the four cardinal directions of the world have come to our Tetova like meteors to honour the great figure of our poetry, Naim Frashëri, to honour this international literary event, our people and culture, therefore I’d like to extend a very warm and friendly welcome to our honoured guests. These days, Tetova will be your town, as it is our tradition as Albanians to honour our guests, and even more so the people of the pen, who irradiate knowledge, benevolence, peace and light wherever they are, wherever they go, like doves carrying the most meaningful messages for humanity.” 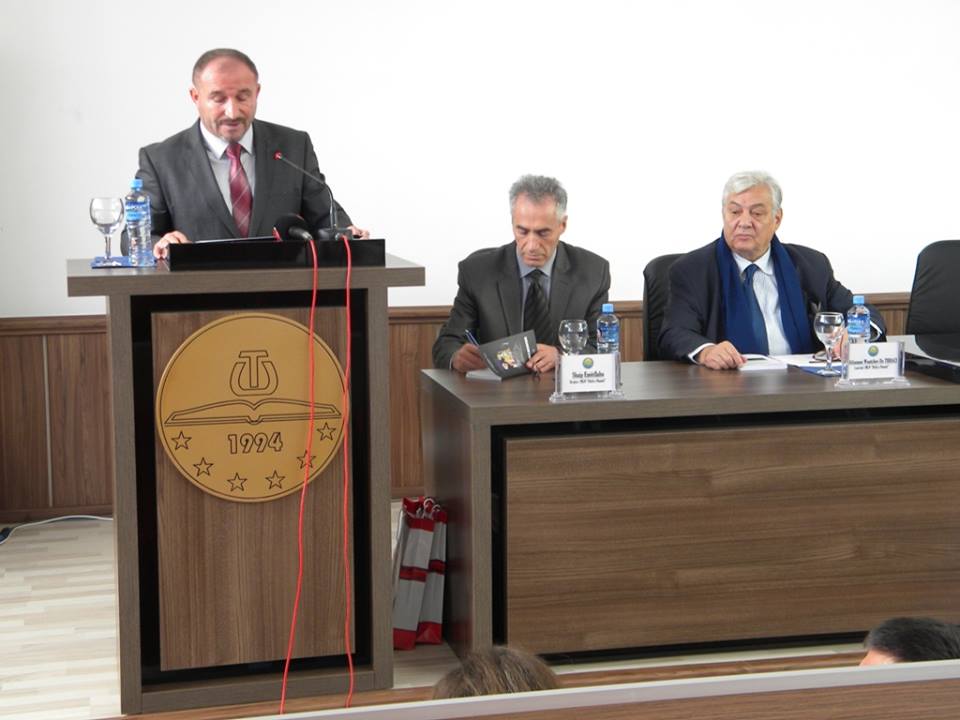 The dean also expressed his special consideration for this festival and its directors and appreciated the laureate Athanase Vantchev de Thracy, wishing him further success. “We are pleased that just this prestigious Festival, which is not only recognized in our country and region and beyond, but a meeting place of well-known poets from all over the world, the literary event ‘Ditët e Naimit’ has become an international cultural event, and therefore it merits the due attention and special respect of all.

We also have to thank the organizator of this Festival, its director Shaip Emërllahu, who with commitment and his artistic sensitivity has enriched through 17 editions in sequence the cultural life in the town of Tetova, and thus we all together, every year, honour the most emblematic part of our national renaissance, Naim Frashëri.

Every year, our university supports the organization of this International Poetry Festival, and I believe that this cooperation will continue in the future as well.

Finally I wish the director of the Festival to continue successfully this activity, whereas we wish the participating poets and this year’s laureate Athanase Vantchev de Thracy new successes in their creative work.”

The director of the Festival himself, Shaip Emërllahu, appreciated a lot this perennial cooperation with the State University of Tetova, expressing his special thanks for the dean, Prof. Dr. Vullnet Ahmeti, who, according to Emërllahu, has indefatigably supported this Festival.

The motivation of the jury was read by Ndue Ukaj. The jury of the Festival was composed by Prof. Dr. Agron Tufa (chairman), Doc. Dr. Salajdin Salihu (member) and Ndue Ukaj (member).

At the end of this presentation, the dean of the State University of Tetova, Prof. Dr. Vullnet Ahmeti , presented the laureate Athanase Vantchev de Thracy after a warm reception in his office with the insignia with the emblem of the University. 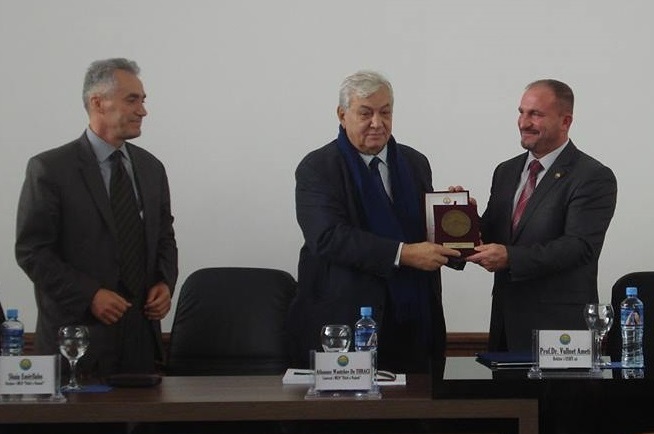 According to the programme, the poets left afterwards for Albania. They visited Kruja with the historical museum “Gjergj Kastrioti Skënderbeu”, the ethnographical museum of Kruja and the touristic venue “Sari Salltëk”. On the same day, the poets were also received at the Headquarters of the Bektashi Community by the Great-Grandfather Baba Edmond Brahimaj.

The final night of the Festival took place in the hotel “Tirana International” in Tirana, where during the great literary hour “Poetic Meridians”, poetry was recited and the remaining literary prizes of the Festival were awarded. The prize “Ditët e Naimit” for the literary carrier was given to the Albanian poet Ramadan Musliu from Kosova, the prize “Menada” for special poetic values was awarded to the Polish poet Krystyna Lenkowska and the literary prize “Oeneumi” for the best poetic cycle to the Puerto Rican poet Juan A. Franqui. Two awards “Naim’s Candle” went to the hands of the poets Leticia Villagarcía from Mexico and Lesya Mudrak from Ukraine. 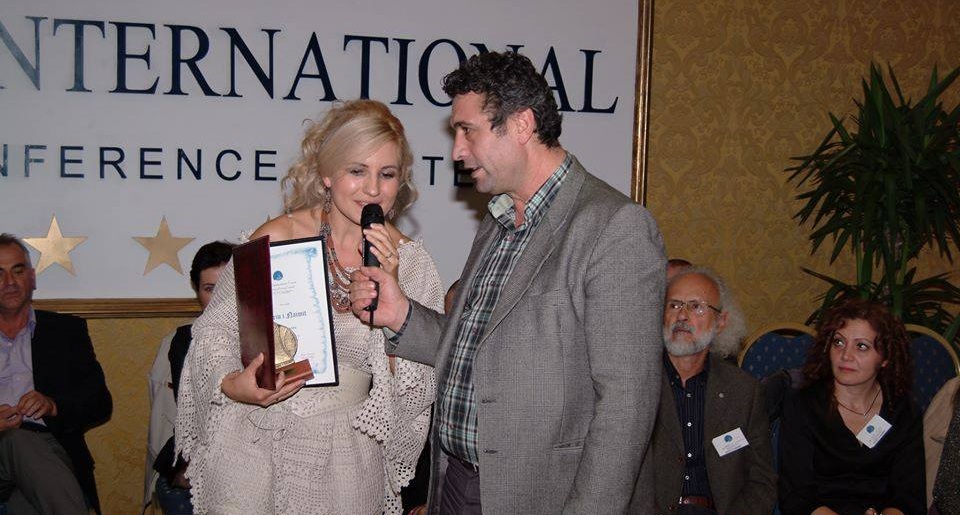 At the closure of the Festival, the World Headquarters of the Bektashi Community gave the director of the Festival, Shaip Emërllahu, a certificate of acknowledgement of gratitude with the motivation “For the excellent perennial contribution to the organization of the International Poetry Festival ‘Ditët e Naimit’”. 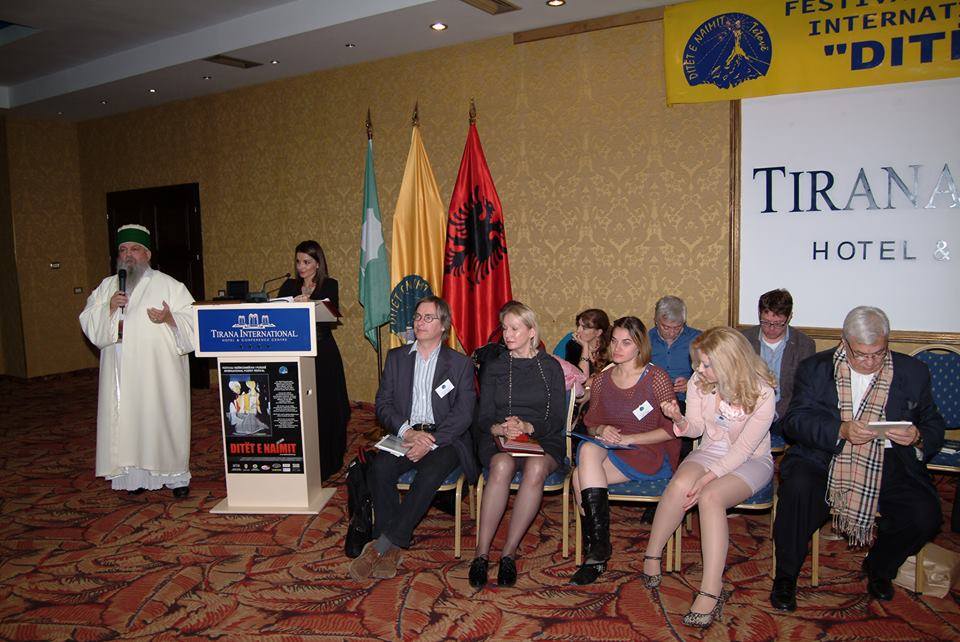 Also for this edition, the direction of the Festival has published the anthology of the poems of the participating poets, “Fytyra e heshtjes” (Face of Silence), edited by Shaip Emërllahu. The translations it contains were made by the translator and gifted poet Silke Liria Blumbach. 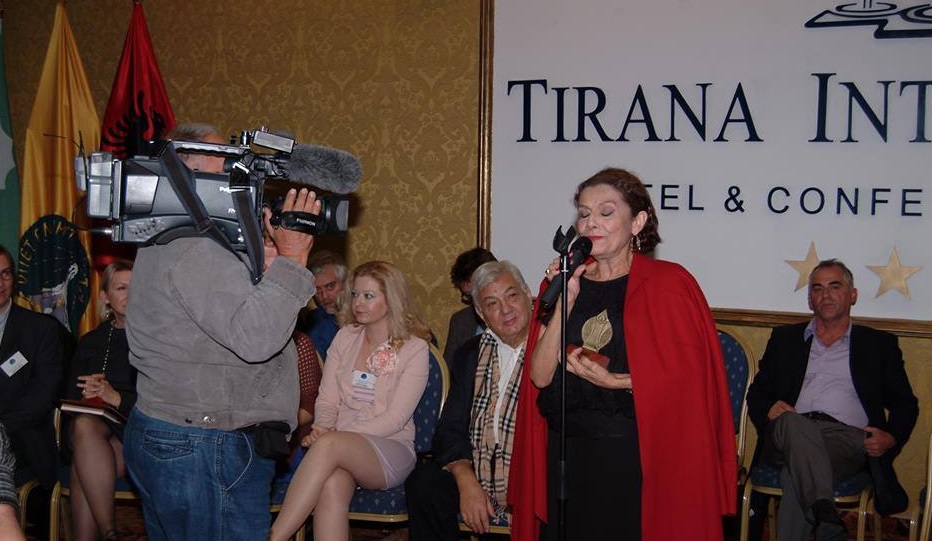 The Festival was moderated by the actress Valdete Ismaili, whereas the poems were read in Albanian by the actor Arsim Kaleci and with kitara maestro Jeton Pustina.

The Festival was supported by the Ministry of Culture of Macedonia, the Municipality of Tetova and the Bektashi community. 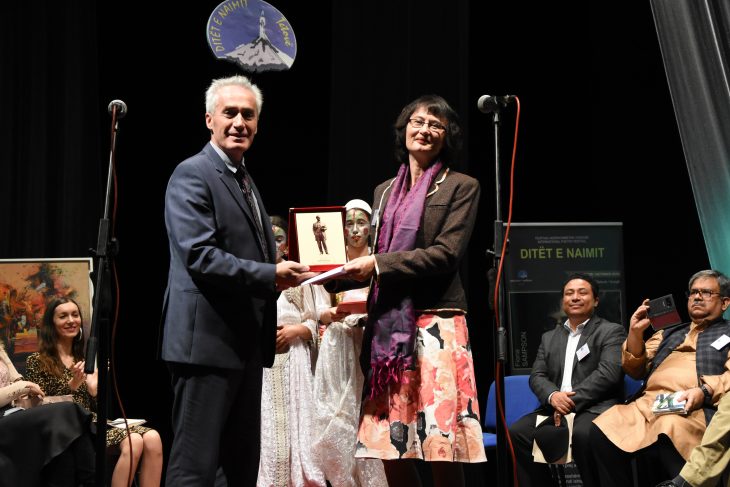 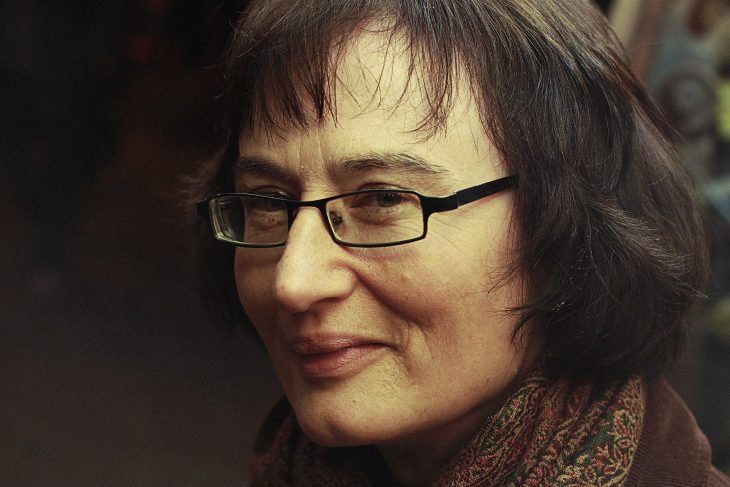